The SPAC bubble is bursting

With monetary policies tightening, speculative bubbles are bursting one after the other. SPACs are no exception.

As a reminder, a SPAC, or Special Purpose Acquisition Company, is a company with no operational activity - an empty shell - that raises funds on the stock market with the sole objective of making an acquisition or acquisitions.

It asks investors to sign a "blank cheque" with a promise to use the funds raised to acquire an unlisted company in return. Once the deal is completed, the SPAC renames itself after the acquired company, which gets access to the funds raised. The stock is then traded on the stock exchange like any other listed security. SPACs are therefore "liquid" investment vehicles for obtaining "pre-IPO" shares in high- growth companies. SPACs offer a major advantage for those aiming for a quick IPO: the financial disclosure requirements are less stringent than for a traditional IPO. On the investor side, they have attracted billions of dollars from individuals and hedge funds seeking the higher potential returns (and risks) often associated with private markets.

The period of massive liquidity injections that was put in place in 2020-2021 in response to the Covid pandemic has played an important role in the exponential growth of SPACs. Indeed, these financial securities have been around since the 1990s but their numbers really exploded in popularity in 2020 and the first part of 2021.

In 2020, no less than 227 transactions worth USD 76 billion were recorded. The year 2021 was even more spectacular: according to Ernst & Young, a total of 646 SPAC transactions were recorded worldwide for a total issue volume of USD 161 billion. 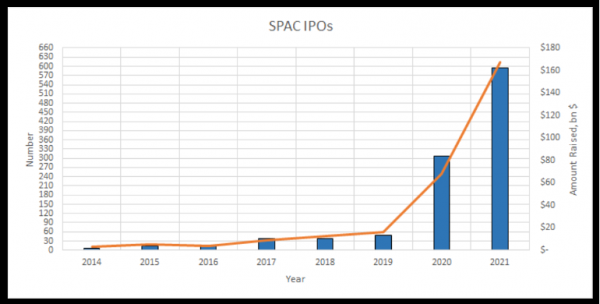 But the SPAC boom seems to be behind us. Indeed, the bubble is bursting, with research firm Audit Analytics reporting that at least 25 companies that merged with SPACs between 2020 and 2021 have issued liquidation warnings in recent months. These warnings mean that a company's auditor has deemed that there is "significant doubt" about the company's ability to survive the following year. According to Audit Analytics, this is twice the number of warnings issued by companies listed through a traditional initial public offering (IPO).

Companies that have gone public via a SPAC are on average down 60% since the date of issue. The Defiance Next Gen SPAC Derived ETF (SPAK) is down 45% since its June 2021 highs. 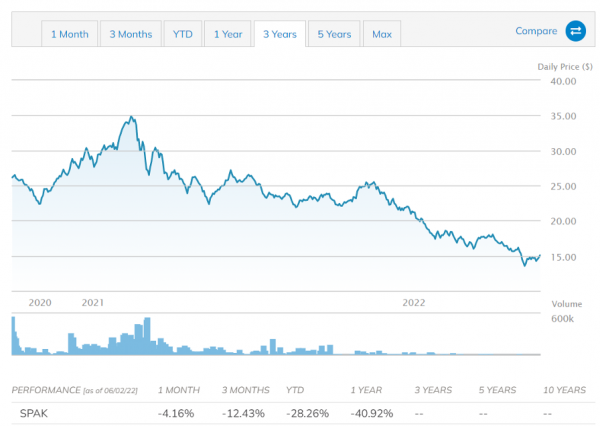 Many startups that went public via SPACs now find that their revenue projections at the time of fundraising were in fact far too ambitious. The delay in business development leads to significant cash flow problems. This is particularly true for many startups operating in the electric vehicle (EV) sector, as recently highlighted in a blog by Wolfstreet.com.

Electric Last Mile Solutions (ELMS: Nasdaq), an EV startup that went public in June 2021 through a merger with a SPAC, revealed late last month that it would run out of cash by June. In February, CEO James Taylor and Chairman Jason Luo, both co-founders, were ousted, with immediate effect, following an internal investigation into share purchases they made just before the company announced its IPO through a merger with an SPAC in December 2020.

Electric Last Mile is under investigation by the SEC. Its auditors decided to throw in the towel in February. Since then, the company has not been able to hire a new audit firm and therefore has no one to audit the financial reports it has yet to file. In addition, the company has to perform a review of some of the quarterly reports it has already filed.At the end of May, the ELMS share price was down 94% from its peak in June 2021. 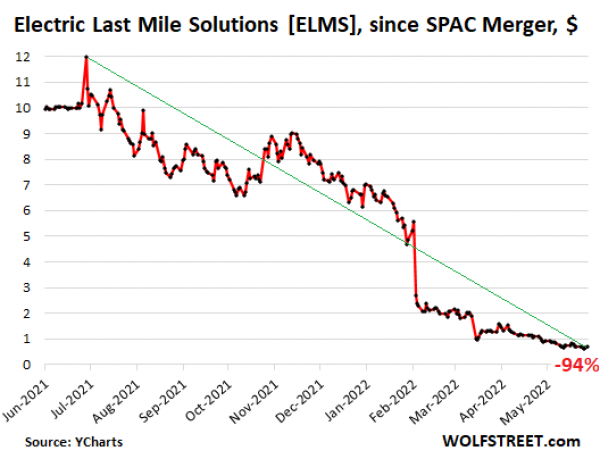 At the rate the company is burning through cash, ELMS is likely to be the first SPAC (in the current cycle) to fall to zero. But it may not be the last.

Startup EV Canoo [GOEV: Nasdaq], which went public via a merger with a SPAC in December 2020, said in its first quarter earnings call that it may not have enough cash to continue operating, adding that "there is significant doubt about the company's ability to continue as a going concern."

The company is now trying to raise funds by selling $300 million in new shares and issuing debt for the same amount. The company is also under investigation by the SEC regarding its merger with SPAC and its "operations, business model, growth strategy, revenues, customer arrangements and other related matters, as well as the recent departures of certain of the company's executives." A bit of a boon for class action lawyers... Many executives have left the company, including the co-founders, the CEO, the CFO and the COO. Canoo has still not replaced its CFO and is using an "interim CFO".

At the end of March, Canoo still had $105 million in cash. According to its forecasts, it expects to spend about $200 million in the second quarter while generating no revenue. Should Canoo manage to raise the aforementioned $600 million, the company would be able to extend its survival for three more quarters, until the end of 2022 and possibly into 2023. But if Canoo is not able to generate revenue by then, the $600 million raised from investors will be gone and the company would have no choice but to file for bankruptcy.

According to wolfstreet.com, Canoo does not appear to be in a position to produce a marketable vehicle any time soon. The quarterly loss at the end of March was $125 million. The company would need billions of dollars from investors - not a few hundred million - in order to accelerate its R&D programme and produce its first vehicles. Without this acceleration of development and production, the company has almost no chance of covering its operating expenses.

Canoo's shares have collapsed by 84% from their highs. The issue of new shares will prove to be dilutive and is therefore unlikely to generate a rebound in the stock - at least in the short term. 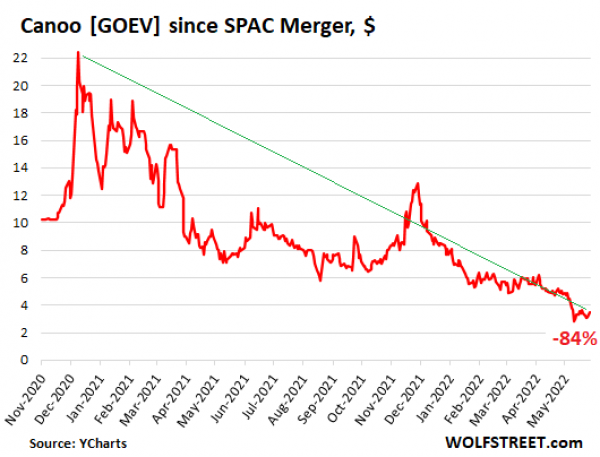 In another example, Lordstown Motors [RIDE], which went public through a merger with SPAC in October 2020, also filed a "going concern" warning with the SEC. At the end of May, the stock was down 94% from its February 2021 peak.

Electric Last Mile, Canoo and Lordstown Motors are among the 25 SPACs that have issued liquidation warnings. Three other EV companies have issued similar warnings. It appears that electric vehicle battery manufacturers may soon add to this list.

It should be noted that regulators are considering changing the rules on SPACs' projections and bringing them closer to IPOs. The US Securities and Exchange Commission (SEC) has said it is considering proposing to limit the legal protections that some SPACs have used in the past when reporting on companies they propose to take public. These measures should limit the likelihood of a new speculative bubble in this segment when market conditions become more favourable.

This marketing document has been issued by Bank Syz Ltd. It is not intended for distribution to, publication, provision or use by individuals or legal entities that are citizens of or reside in a state, country or jurisdiction in which applicable laws and regulations prohibit its distribution, publication, provision or use. It is not directed to any person or entity to whom it would be illegal to send such marketing material. This document is intended for informational purposes only and should not be construed as an offer, solicitation or recommendation for the subscription, purchase, sale or safekeeping of any security or financial instrument or for the engagement in any other transaction, as the provision of any investment advice or service, or as a contractual document. Nothing in this document constitutes an investment, legal, tax or accounting advice or a representation that any investment or strategy is suitable or appropriate for an investor's particular and individual circumstances, nor does it constitute a personalized investment advice for any investor. This document reflects the information, opinions and comments of Bank Syz Ltd. as of the date of its publication, which are subject to change without notice. The opinions and comments of the authors in this document reflect their current views and may not coincide with those of other Syz Group entities or third parties, which may have reached different conclusions. The market valuations, terms and calculations contained herein are estimates only. The information provided comes from sources deemed reliable, but Bank Syz Ltd. does not guarantee its completeness, accuracy, reliability and actuality. Past performance gives no indication of nor guarantees current or future results. Bank Syz Ltd. accepts no liability for any loss arising from the use of this document.

You chose the following profile. If you made a mistake, please change here Non USA citizen