Wall Street has its share of mysteries, not least the 'night effect', a market anomaly whereby money invested in US stocks works better at night than during the day.

Investors are always looking for new strategies to maximise their gains while limiting the risk of loss. One of these strategies has had astonishing results over the past few decades. Yet it remains one of Wall Street's least known market phenomena. It is a strategy that involves buying US stocks at the close and selling them at  the following day’s opening. In a way, holding your positions outside of official trading hours (at night) and getting rid of them during the market session (during the day).

In this note, we first present the remarkable performance achieved with this strategy. We then discuss some of the possible reasons for this market anomaly. The last part highlights investment instruments that allow to position on this strategy at a lower cost.

What is the night effect?

The "night effect" or "buy the close sell the open" strategy involves buying US stocks at the market close (04.00pm New York time) and selling them at the open (09.30am New York time).

According to Bespoke Investment Group, which has conducted research since the inception of SPY, an index fund (ETF) that replicates the S&P 500 index, this strategy clearly seems to work. As the chart below shows, a strategy that consists of being positioned overnight has generated a return of more than 1000% between the end of January 1993 and March 2022 (see the pink line). Note that this pro-forma analysis does not include transaction costs or dividends.

This performance was compared to the alternative "intraday" strategy (the blue line), which consists of buying at the opening and selling at the closing. Over the same period, the underperformance is considerable as this strategy generated a slightly negative cumulative performance.

In fact, the entire performance of the S&P 500 during the period under consideration took place at night and not during the day.

Note that the same phenomenon was observed in US small and mid caps, but also in international markets, from Japan to Norway.

Like market seasonality, the Monday effect or the small and mid-cap bias, this is a market anomaly. 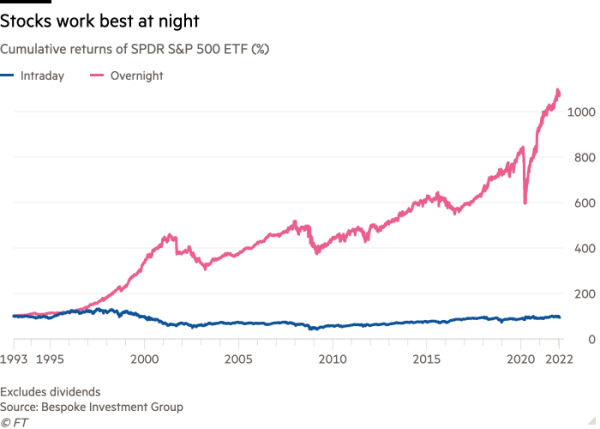 Why such a market anomaly?

First, it should be noted that a market anomaly is often eventually arbitrated and is not necessarily likely to be repeated in the future. And as the well-known saying goes: past performance is no guarantee of future results...

So let's look at the elements that could retroactively explain the remarkable outperformance of the night effect.

The first explanation is the activity of day traders, who usually do not have open positions outside market hours.  Day traders are therefore likely to trade at the opening, which in most cases means going long US stocks. As a result, stocks tend to appreciate more at the opening of the market. At the end of the day, these same traders will look to close their positions, which means they will sell. Therefore, this creates a pattern where the market tends to trade lower at the close and higher at the open the next day.

The "buy the close sell the open" strategy takes a sort of opposite position to that of the day traders. This does not necessarily mean that it works better (some day traders make large gains during the day by winning back and forth during the official trading session). But the overnight strategy does take advantage of buying and selling pressure at the beginning and end of the session.

Other explanatory factors can be identified via behavioural finance and the often irrational actions of investors.

According to Michael Kelly, a professor of finance at Lafayette College, it is possible that busy traders suffering from the 'illusion of control' believe that they can react easily to news and events during the day, but cannot do so as easily outside of official trading hours, when there are far fewer market participants and less cash involved in transactions. "Some traders may be inclined to sell at the close of the market to feel in control of their holdings overnight," he said.

It would seem that smaller traders are prone to this practice and tend to sell at the end of the day - whereas institutional traders, who are well aware of the historical performance gap between day and night, tend to buy at the close and sell at the open. Since relatively few people trade after the market closes, orders tend to accumulate overnight. In a bull market, this produces a surge in prices at the opening of the market. But in prolonged downturns, overnight sell orders can cause prices to fall at the market open.

Part of the performance gap between the official session and the "off market" can also be explained by the human tendency to panic at bad news, said Professor Kelly. "This panic seems to happen during the day," he said. "One of the advantages of not trading during the day is that you are not as likely to participate in the panic selling movement..."

Bruce Knuteson, a former DE Shaw hedge fund analyst, has a much more controversial and 'conspiratorial' interpretation of this market anomaly. He believes that it is due to systematic and large-scale market manipulation by some quantitative hedge funds.

According to Knuteson, hedge funds use algorithmic or systematic strategies that take advantage of the greater impact that trading can have when markets are closed and liquidity is lower. They aggressively buy stocks they already own, driving up their price. Then, when the markets open and liquidity improves, these hedge funds can gradually liquidate their positions without impacting the market too much. By doing this systematically on a daily basis, these hedge funds are able to generate gains overnight while suffering only small losses during the day. The validity of this explanation is questioned by many researchers.

Indeed, different studies put forward different explanations. First, the US stock market is officially open for only a fraction of the day day (6.5 hours to be exact). But in practice, you can trade stocks 24 hours a day. George Pearkes of Bespoke Investment Group has calculated that if you take into account the different lengths of the trading windows, the average performance of the official session and the 'night' hours are not that different.

On the other hand, a New York Federal Reserve study of S&P 500 futures has shown that average realized returns peak between 2 and 3 a.m. in New York. Interestingly, this is around the time that European traders start trading, which tends to contradict Knuteson's theory about the role of hedge funds.

Finally, a quarter of US corporate earnings are released just after the market closes, and 60% in the morning just before the market opens. Most companies tend to exceed market expectations and therefore benefit from performance spikes during the so-called "pre-opening" and "after hours", which partly explains the overnight effect.

These arguments have been dismissed by Knuteson in various essays, entitled "They chose not to tell you" and  "They still haven't told you".

How to invest in the "Night effect"?

Knuteson's essays and various academic research studies have inspired asset manager Nighshares to launch investment products dedicated to this strategy.
Indeed, two ETFs aimed at exploiting the above-mentioned market anomaly were launched at the end of June this year. These are the NightShares 500 (ticker NSPY), which buys S&P 500 stocks at the 4pm close every day and then sells the positions the next day at the 9.30am opening. And the NightShares 2000 (NIWM), which applies the same strategy to the Russell 2000 small-cap index.

Note that these ETFs do not actually buy all the stocks each night with a resale the next morning, as this would create a high level of transaction costs. Instead, both ETFs use stock index futures and swaps to replicate the strategy.

Both ETFs are listed on the New York Stock Exchange and have an annual expense ratio of 0.55%. Their assets under management are currently a few million dollars.

The questioning of the efficiency of financial markets is based in particular on the identification of phenomena that constitute "anomalies" in relation to the precepts of the theory. The dichotomy between the performances recorded during the official session and those observed outside these hours contributes to the debate. There is no evidence that the outperformance of the "buy the close sell the opening" strategy is sustainable. But some of the explanations put forward by financial research suggest that this trend could continue.