The current context of record high inflation with the risk of a sharp economic slowdown is exceptional. Will the Fed be able to engineer a “soft landing”?

In recent months, the US bond yield curve has signaled financial markets unambiguously - the US Federal Reserve would raise rates quickly and sharply. Around 8 rate hikes are currently expected by year end. But the markets also seem to believe that this US monetary policy tightening should be followed by rate cuts from 2023 onwards since the consensus now anticipate a sharp slowdown in US growth as early as next year. "Stagflation" and "recession" are now among the most frequently searched terms on Google.

There is even talk of a "war recession", as the current macroeconomic cycle is unlike anything we have seen in recent decades. Indeed, recessions or sharp economic downturns usually result in lower inflation due to a slowdown in demand. But the current context is different: we could very well experience a downturn in demand while costs and inflation continue to rise or, at the very least, remain very high. This is due to the many supply shortages in the labour market, in the housing sector and of course in commodities.

It is quite possible that despite these downside risks to growth, central bankers will have no choice but to maintain their planned rate increases and liquidity withdrawals via quantitative tightening. Indeed, the gap between the current level of inflation and interest rates just looks too wide. A few figures to consider: the inflation rate in the US reached 8.5% over a 12-month rolling period in March. The last time price inflation reached this level was in 1981. At that time, the Fed funds rate was 13% compared with 0.33% today. It thus seems that the Federal Reserve still has a lot of catching up to do...

Of course, once the tightening of financial conditions would start to have a significant impact on the growth of the economy and the production of goods and services, it is quite possible that the Fed will abandon - or at least scale back - its restrictive monetary policy program. But it seems that such a scenario is well off the mark.

Indeed, several elements indicate that we are facing some structural inflation, i.e. not or only slightly affected by a potential drop in demand. Among the factors which could keep inflation high:

1. De-globalisation. In the wake of the pandemic, governments of developed countries have become aware of their vulnerability to the risks associated with globalisation and the offshoring of supply chains.Their wish to repatriate part of the production back to their home country (or at least closer) was further accentuated by Russia's invasion of Ukraine. As a result, the coming decade could be characterised by a reshoring of production. This trend is inflationary;

2. The commodities supply shock. In the past, the price of a barrel of crude oil could not remain permanently high because it was facing self-destruction of demand. This scenario seems less plausible today. On the demand side, most governments have already put in place some subsidies, which do not help the inflationary situation. On the supply side, the response of governments since the beginning of the Russo-Ukrainian conflict has been slow. Let’s also keep in mind that the crisis we are facing is not only about energy. Unlike during the 1970s oil crisis, this time it is a supply shock for almost all commodities as Russia is a major exporter not only of oil and gas but also of industrial and precious metals, agricultural commodities, etc. The sanctions against Russia came at a time when the world was already facing an imbalance between supply and demand for commodities. The addition of these factors created a crisis that we have never faced before;

3. Fiscal policy. Without the possibility of monetary stimulus, governments in the developed world have no choice but to resort to expansionary fiscal policies. Admittedly, they are more targeted than during the pandemic. But they continue to widen budgetdeficits, prompting central banks to maintain "financial repression". In other words, nominal rates are rising but real rates have never been so negative. The reason: positive real rates would weigh heavily on deficit financing and could lead to a sovereign debt crisis. The corollary of financial repression: it seems very difficult, if not impossible, to fight inflation with negative real rates. In the 1970s, Paul Volker used positive real rates of over 2% to beat inflation. It should be remembered that despite all the hawkish rhetoric from the Fed in recent months, the money supply in the US continues to grow by around 11% over a rolling 12-month period. This increase is certainly less significant than during the covid crisis, but it is difficult to reconcile the fiscal situation with a decline in inflation;

4. The ultra-domination of certain large companies. One of the big surprises of the first quarter of 2022 was the resilience of the margins of S&P 500 companies. Despite the rise in input costs, companies have managed to maintain their level of profitability by passing on the increase in prices to consumers. This could be explained by the fact consumers are doing well (unemployment at its lowest level in decades, comfortable savings rates, etc.). But another reason might be that some large companies (notably the famous FANGs) enjoy a quasi- monopolistic status that allows them to impose their prices. This is also a structurally inflationary factor;

5. The power of habit. Financial markets have experienced several decades of deflation and disinflation. In the current context, the consensus believes that higher rates will lead to lower rates the following year. Flattening or even inverting the yield curve may actually be counterproductive for the Fed as financial conditions are not sufficiently restrictive to slow activity and therefore contain price increases. Consider the housing market, for instance. True, the rise in 30-year mortgage yields has been relatively brutal in recent months. But it is probably not enough to slow the sharp rise in house prices - and hence rents - in the US.

For the US Federal Reserve, slowing down an economy that is overheating and facing numerous capacity constraints in a context of de-globalisation, war and historically low unemployment (see below) is a very complex exercise. But does this necessarily mean we are entering a long and painful period of stagflation?

The most encouraging signals about the sustainability of this expansion come from the labour market. Historically, recessions have always been preceded by rising unemployment. But the figures point in the opposite direction. The number of job vacancies exceeds the number of unemployed by several millions. Claims for unemployment benefits are at their lowest level since 1968. There is therefore sufficient reason to believe that consumer incomes will continue to be buoyant for the rest of the year. And it seems unlikely that the tightness in the labour market will reverse any time soon. This is good news for the US consumer - who makes up 70% to 80% of US GDP. Moreover, the savings rate remains high and household debt is low, two other positive factors for the US economy.

Other reasons to be cheerful for America: companies are in good shape. Indeed, S&P 500 profits should grow by almost 10% this year, credit spreads remain relatively tight and leading indicators testify to the optimism of companies.

But there are also reasons to turn cautious. High energy prices and other inflationary pressures have already dented consumer confidence and pose a credible threat to economic growth. US household sentiment surveys have been depressed for several months now.

On the business side, the Purchasing Managers' Index (PMI) for March fell to its lowest level since September 2020 as new orders and production slowed significantly, indicating weakening demand. The withdrawal of Fed support and rising borrowing costs will likely lead to a slowdown of the economy in the coming months. And this will certainly be reflected in corporate earnings growth.

Finally, the market is also sending some very clear signals of caution. Let's start withMixe the US Treasury yield curve. As mentioned before, this may be a misinterpretation by the markets of the upcoming rate cycle. But in the past, the yield curve has often been a good early indicator (15 to 18 months) of a coming recession. Another signal of caution is the outperformance of defensive sectors (utilities, health care, etc.) relative to cyclical sectors. 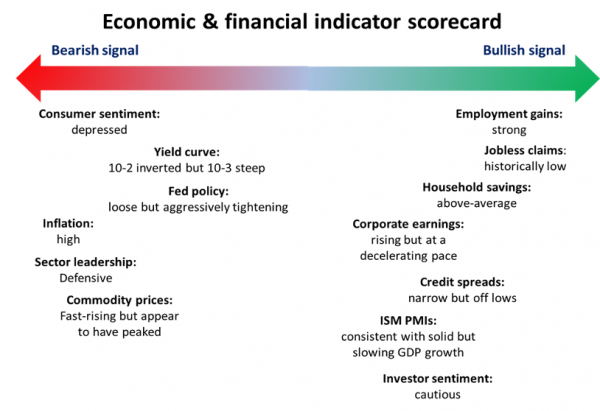 In summary, the latest macroeconomic data indicates that growth is about to slow down, but also that the probability of a recession seems low for the time being. In our last investment committee meeting, we dismissed the "stagflation" scenario as the one with the highest probability of occurring. While we expect inflation to remain well above the Fed's targets, we also believe that growth should remain above the long-term trend.

However, we remain extremely vigilant. First because the current context is unprecedented; this means that a monetary policy accident (central bank staying too far behind the curve or panicking) remains a real risk.

Second because the current state of the economy - record levels of debt, high leverage, demanding valuations and high concentration of wealth - means that it is the financial markets that impact the real economy - not the other way around. Can the Fed reasonably expect inflation to slow when equity markets are near all-time highs and credit spreads are relatively tight? On the other hand, wouldn't a 20% to 30% drop in equity markets and a sharp widening of credit spreads send the US economy into recession?

As we know, the landing a plane is the most dangerous time for a pilot. For the Fed as well...