Among the hot topics discussed at the Bitcoin 2022 Summit in Miami was the Lightning Network, a blockchain overlay that allows off-blockchain transactions and which is expected to enable bitcoin to become a common form of payment.

Despite the many criticisms levelled at Bitcoin (speculative bubble, carbon emission, etc.) it is clear that the most important crypto-currency has become a true financial asset. The "digital gold" is even considered as a possible reserve currency by some central banks (see our FOCUS: "Towards a new international monetary order?").

However, for the time being, Bitcoin seems to be failing on one of its missions: to become a common means of payment. This is for the following reasons:

1. Speed: The network can only process 7 transactions per second on average, far from the volumes of payment networks such as Visa or Mastercard. This is not a weakness of the blockchain but rather a consequence of the decentralization of the system. As the adoption of Bitcoin continues, the system will quickly reach saturation;

2. Costs: Transaction fees on the Bitcoin blockchain are flat. This feature makes the network attractive for large sums (millions of dollars can be transferred for a few dollars in fees) but very costly for small sums, making it a barrier for consumer-related transactions;

4. Use cases: Because of the limited interest in using Bitcoin as a means of payment, the number 1 cryptocurrency attracts mainly speculators and HODLERs, who prefer to bank on Bitcoin's appreciation rather than its daily use.

Nevertheless, since last year, El Salvador, a small South American country, has adopted Bitcoin as a common means of payment. Other emerging markets such as Nigeria, South Africa and Brazil soon followed suit thanks to an extension of the Bitcoin protocol called the "Lightning Network".

What is the Lightning Network?

In order to address Bitcoin's limitations, a group of programmers decided to establish a payment channel (layer 2) on top of the main Bitcoin blockchain (layer 1). This solution makes the Bitcoin blockchain and validation process much lighter, greatly increasing the speed of transactions and greatly reducing the cost. All this while remaining true to Bitcoin's principles of promoting privacy, transparency and security.

The improvements over Bitcoin's Layer 1 are obvious:

1. Speed: This system allows up to 25 million potential transactions per second and validation of transactions is almost instantaneous;

2. Costs: Validation fees are in the order of a few cents and proportional to the amounts transferred;

4. Use cases: Tiny amounts can be transferred, making micropayments possible.

How does it work?

The fundamental principle of the Lightning Network system is that bitcoin transactions can be made without the need for "mining", the validation process that involves the thousands of computers, or nodes, that make up the Bitcoin network. In the context of the Lightning Network, only two types of transactions are published on the Bitcoin network and then verified and recorded in the blockchain: those that open and feed payment channels between Lightning Network members and those that net the exchanges that have taken place between them over a period of time. The process is therefore considerably streamlined without losing security.

It is the equivalent of an account opened with the hotel where you stay on vacation: you feed an account at the beginning of your stay, take advantage of the hotel's services by putting the expenses on the room you occupy and then settle the balance of the expenses at the end of your stay.

These payment channels can be opened by anyone who wants to, and with anyone you want to. They are fed in satoshis (SAT), or units of 0.00000001 bitcoin (BTC). All these exchanges are done in parallel to the main chain.

Like the Bitcoin blockchain, security is ensured by a system of economic incentives to operate the protocol. But unlike Bitcoin, it is not a "Proof-of-work" type of mining process but a so-called "anti-cheating" cryptographic process:

if one of the two members of a channel tries to cheat, it automatically loses all its funds and it is the injured party that recovers the totality of satoshis present on the channel.

The process has been in place since 2018, seems to work and has been relatively unattacked from a technical point of view so far. It coexists with the Bitcoin blockchain. In a way, it makes sense to continue to make large payments via Bitcoin (Layer 1) and use the Lightning Network (Layer 2) for smaller amounts. To make an analogy with Finance 1.0, the 1st is your bank account, the 2nd your debit card.

How is the Lightning Network developing?

While it drew a lot of criticism and skepticism at its launch (much like bitcoin itself), the network is growing rapidly. But like any technological advancement, the main barrier to development is what is known as pain of adoption. The network is only useful if a large number of people decide to adopt it.

Mass adoption is indeed the ultimate goal of this project. Today tens of millions of people are in possession of bitcoins but very few use the cryptocurrency in transactions. In the long run, the goal is to encourage more than a billion people to make their transactions in bitcoins (or rather in satoshis).

Lightning Labs, one of the main development companies of the Lightning Network, wants to accelerate the adoption of this Bitcoin-backed network. There are two possible strategies for doing this. The first is to integrate the technology into applications already active in cryptocurrencies such as Coinbase, Robinhood or Cash App in the United States. Some of these companies have made important announcements in this direction during the Bitcoin 2022 summit in Miami. For example, Robinhood announced last week that it would integrate its crypto wallet into the Lightning Network.

The second focus of the Lightning Network's development is to develop tools for developers to create applications that will facilitate the adoption of the network. This is the goal of Lightning Labs co-founder Elizabeth Stark: to provide software that will accelerate the adoption movement. For example, the Strike App was developed to facilitate instant micropayments. It takes less than 2 minutes to install on your phone from the Apple Store and connect with your credit card. Other start-ups active in this space are Zebedees, BlueWallet, Wallet of Satoshi, Breez, etc. A real ecosystem of wallets, applications, development tools, etc. has been created around this project (see below). 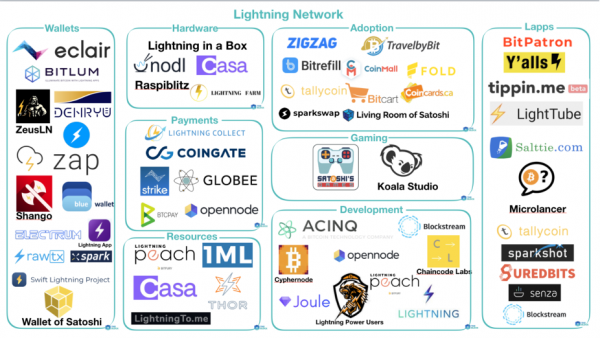 But there are many other functionalities besides payments. The Lightning Network is a peer-to-peer service that works in 1:1 but also in 1:50, 1:10,000, etc. It allows you to make micropayments in connection with social networks such as Twitter to pay everyone you interact with.

For years, bitcoin's many fans have highlighted one of its main features: enabling the one billion people in emerging countries who don't have bank accounts to have access to financial inclusion. With the Lightning network, this vision now seems possible: users have access to micropayments (layer 2) and their savings (the fraction of bitcoin in layer 1) are not devalued by hyperinflation.

But this network also allows to create via new layers messaging systems, video-streaming or VPNs on a very large scale and free of any censorship. It also makes it possible to escape from the framework of the Internet and thus from all the advertisements which are related to it. Another feature is the SSID ("Self-Sovereign Identity") which is a kind of universal identity allowing you to access websites and online distributors without having to reveal all the details of your identity (address, date of birth, etc.). In a way, the Ligthning network has the potential to become the de facto means of payment for accessing web services and resources.

In order for cryptocurrencies to be accessible to everyone, a high-speed, easy-to-use, low-cost payment method is needed. The Lightning network, an "overlay" of the Bitcoin blockchain, is helping facilitate the deployment of Bitcoin as a payment method on a global scale.

However, the Lightning network is still in the early stages of development. The websites bitcoinvisual.com and 1ml.com are tracking the network's deployment progress. As of today, just over 80,000 channels are active, which seems very few. But it is precisely at this stage of development that the activity of the Bitcoin community can play a role.

Support from existing players (Robinhood, Cash App) and the deployment of new applications (Strike, etc.) could help overcome the "pain of adoption" that has prevented so many technological advances from reaching critical mass.