Q3 Review: The “everything down” market

The third quarter was a very volatile quarter for ﬁnancial markets with an astonishingly wide set of declines across all the major asset classes. Indeed, after a dismal ﬁrst half of the year, the vast majority of asset classes recorded a negative performance during Q3, as investors grew increasingly concerned about a looming recession due to a combination of hawkish central banks, major disruptions to Europe’s energy supply and looming sovereign debt crisis in the UK and potentially in Italy.

Story #1 — All main asset classes ended in the red

The third quarter was a very volatile quarter for financial markets with an astonishingly wide set of declines across all the major asset classes. Indeed, after a dismal first half of the year, the vast majority of asset classes recorded a negative performance during Q3, as investors grew increasingly concerned about a looming recession due to a combination of hawkish central banks, major disruptions to Europe’s energy supply and looming sovereign debt crisis in the UK and potentially in Italy.

In spite of a strong performance in July, the major equity indices all lost ground due to a decline which accelerated towards the end of the quarter. For both the S&P 500 (-4.9%) and Europe’s STOXX 600 (-4.2%), this is the first time since the Great Financial Crisis that they’ve lost ground for 3 consecutive quarters, with their year-to-day losses standing at -23.9% and -18.0%, respectively.

Due to persistent inflation and central banks that were more hawkish than expected, sovereign bonds had another poor quarterly performance. Gilts (-14.0%) were the worst affected given the market turmoil in the UK, although both US Treasuries (-4.4%) and European sovereigns (-5.1%) still lost significant ground. Combined with the losses over Q1 and Q2, that brings the year-to-date decline for US Treasuries to -13.4%, and for European sovereigns to -16.7%.

On the credit side, every single credit index we follow lost ground, across each of USD, EUR and GBP – and this for the 3rd consecutive quarter. GBP credit was by far the worst performer, with Investment Grade non-financial down -12.7% over the quarter, compared with -3.2% for EUR and -5.1% for USD.

After a strong first half of the year, there were broad-based declines across different commodity groups in Q3. Both Brent crude (-23.4%) and WTI (-24.8%) saw their worst quarterly performances since Q1 2020 (Covid lockdown). On a monthly basis, Brent Crude has now declined for four consecutive months for the first time since 2017. Both precious and industrial metals also struggled over Q3, with copper (-8.1%) and gold (-8.1%) losing ground as well.

Story #3 — The biggest wealth destruction ever

The combined decline of equities and bonds just hit a new record: in the US, $57.8 trillion in stocks and fixed income market value have been destroyed since the 2021 peak. The big question mark is whether the housing market will be the next shoe to drop. Indeed, while housing prices stay stubbornly high, U.S existing home sales dropped for a seventh straight month in August as affordability deteriorated further due to surging mortgage rates. 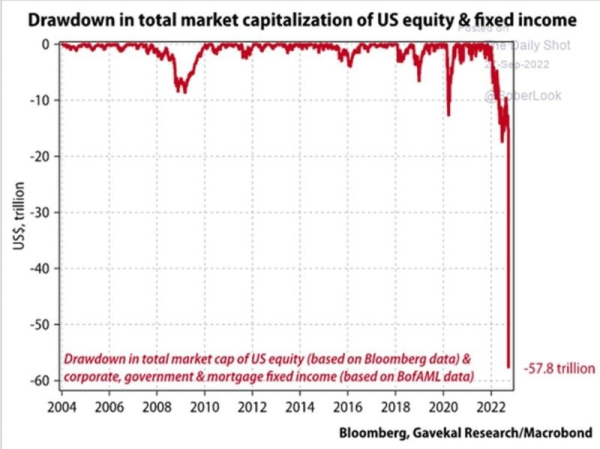 To the surprise of many, the US CPI rose 0.1% in August, after being unchanged in July. Prices were up 8.3% year-over-year, down from 8.5% in July, but above analysts’ expectations of 8.1%.Core inflation rose 0.6% in August, and was up 6.3% year-over-year, accelerating from 5.9%. A hotter-than-expected inflation reading strengthen the Fed’s case for more aggressive interest rate hikes (see next story). Eurozone inflation hit double digits for the first time ever, jumping to record 10% in September. Core CPI accelerates to fresh all-time-high as well. Inflation is broadening on a global scale basis as almost 90% of countries are currently facing headline inflation above 6% on a yoy basis. 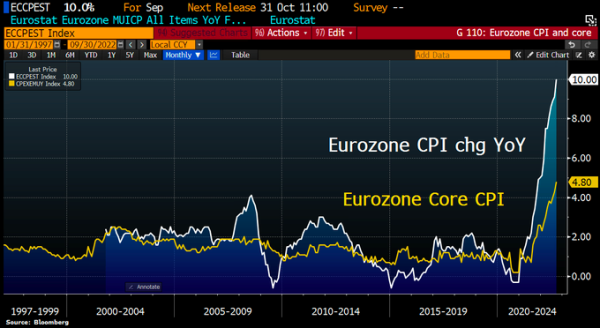 The quarter was off to a strong start for risk assets with the S&P 500 being up by nearly +14% in total return terms over July and early-August as a result of a bear market rally.  That was supported by a belief in the “peak inflation” narrative, suggesting that we had seen the worst of rapid price gains, and that the Fed would thus be able to pivot towards rate cuts moving into 2023. This narrative was supported by a dovish interpretation of the July FOMC meeting, during which Fed Chairman Jeremy Powell said that as “monetary policy tightens further, it likely will become appropriate to slow the pace of increases”. But everything shifted by mid-August in a very hawkish speech from Powell at the Jackson Hole symposium. The Fed then followed through on this hawkish rhetoric, delivering a third consecutive 75bps rate hike at their September meeting. Furthermore, the median dot indicated that officials favored a further 125bps of hikes this year at the two remaining meetings, with the Fed Funds rate still at 4.6% by end-2023.

The story was quite similar at the ECB. At the start of Q3, the ECB was expected to start its tightening cycle in July with a 25bps hike. However, with inflation continuing to rise to new records, they finally hiked by 50bps in July, and followed up with an even stronger 75bps move in September.
For financial markets, the key story of the quarter was thus the fact that central banks became more explicit about how they would be willing to keep policy in restrictive territory, even if growth was to slow. Indeed, September FOMC’s meeting showed that policymakers are willing to keep rates in restrictive territory even if that meant a noticeable rise in unemployment. 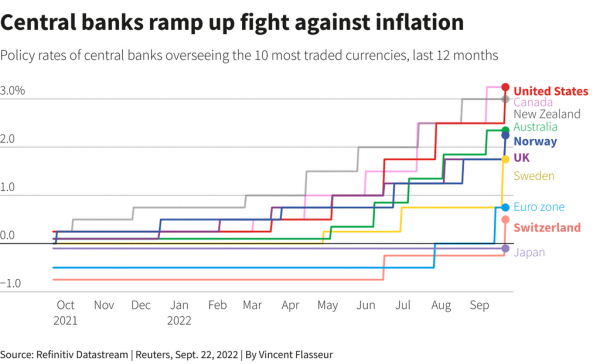 The only main asset class which was up in the third quarter was the US Dollar, which strengthened against every other G10 currency as the Fed reiterated its hawkishness. Over the quarter as a whole, the dollar index strengthened by +7.1%, marking its strongest quarterly performance since Q1 2015. It also marked the first time since the late-1990s that the dollar has strengthened for five consecutive quarters.

While the dollar index continues to appreciate, a detailed analysis shows a significant performance differential between two categories of countries: those in the G10 and emerging countries (excluding China and Russia). It can be seen that, contrary to other periods of crisis, emerging countries are far more resilient than developed countries.

This is due to the euro and the pound, which suggests that it is the European currencies that are weak, rather than the dollar that is strong. 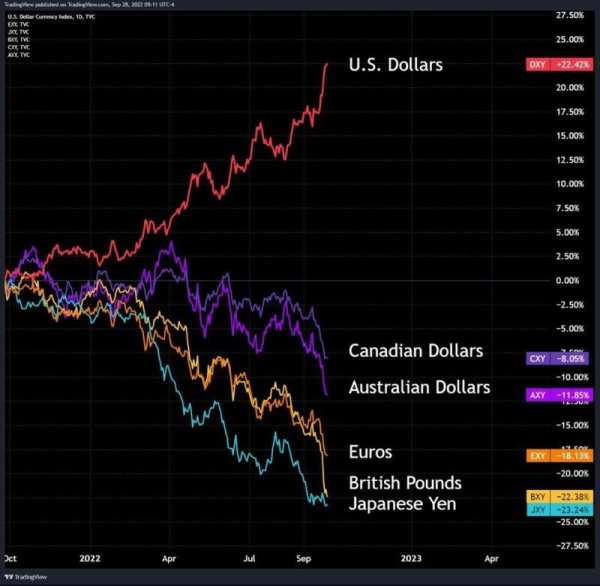 On the economic growth front, the data published over the third quarter, continued to point to a global growth slowdown. The J.P. Morgan Global Composite Purchasing Managers’ Index (PMI) business survey entered contractionary territory in August for the first time since June 2020. Moreover, the local surveys showed that Europe, the UK and the US are all already teetering on the verge of recession.

The global outlook has indeed deteriorated markedly throughout 2022 amid high inflation, aggressive monetary tightening, and uncertainties from both the war in Ukraine and the lingering pandemic. Full-year US growth forecasts have been downgraded to only about 1.5 per cent in 2022. Financial markets are pricing in higher probabilities that a U.S. recession is on the horizon (see chart below). Growth in China is projected to slow to about 4 per cent in 2022 due to new waves of COVID-19 infections and rising geopolitical risks. European economies have so far proved resilient to the fallout from the war in Ukraine, but strong headwinds and downside risks persist. The region is facing combined pressures from the energy crisis, high inflation, and monetary policy tightening. A recession this winter looks increasingly likely. 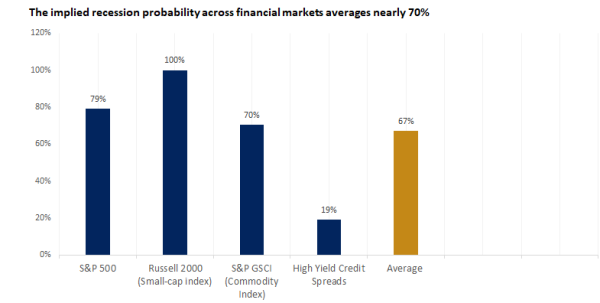 Europe continues to sink into an unprecedented energy crisis. In August, the one-year contract price for electricity in France exceeded €1,000 per megawatt hour for the first time. The German equivalent also reached a record high of €829 per megawatt hour. Of course, these prices are very volatile and did fall sharply in early September (see graph below). Moreover, many countries (France, Greece, etc.) are ready to put support measures in place, particularly for the most financially strained households. Finally, we note that EU natural gas stocks reported in August were in line with the historical average, thanks to increased imports of liquefied natural gas (LNG) and the reactivation of coal-fired power plants.

However, a substantial reduction in gas flows through the Nord Stream 1 pipeline could keep European energy prices high and lead to a very complicated winter. In early September, Gazprom announced that it had "completely stopped" gas transport through Nord Stream until a previously undetected oil leak was rectified. This could take days... or months. This means that Europe will now be forced to rely even more on the much more expensive LNG sold by China. The risks of recession in the EU therefore remain high, as shown by the weakness of the euro, which has fallen below parity with the US dollar.

The UK is in the midst of a financial crisis of rare intensity. During the last week of September, the pound hit an all-time low against the dollar, coming very close to parity, while sovereign bonds saw their yields reach their highest level since 2008. The scale of the crisis is such that members of the Bank of England worked through the night to save the UK's pension fund system. Indeed, the collapse of gilt bonds has led to huge margin calls on UK pension funds, triggering forced sales of gilts, further fueling the decline. The following morning, the Bank of England had to announce the temporary suspension of the Quantitative Tightening and the implementation of a sovereign bond purchase programme in order to curb the rise in yields. Following this announcement, UK 30-year bond yields, which had previously reached a 20-year high (>5%), fell by 0.75% to 4.3%, the largest daily fall in yields on record. 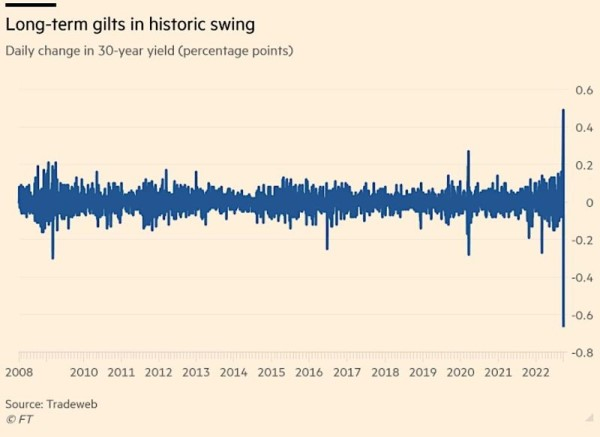 Last but not least, we note that cryptocurrencies sectors outperformed other traditional assets in Q3, recovering from double-digits losses in Q2. Despite a sharp post-Merge pullback, Ether (ETH) managed to close the quarter up more than 20%. After rallying in August, BTC lost most of its gains in September and ended the quarter slightly down following a drop in global risk sentiment.

Interestingly, we note that some brits chose to take refuge in bitcoin during the UK crisis. GBP/BTC trading volume on the Bitstamp and Bitfinex exchanges, which is usually around $70 million per day, reached a staggering $881 million on 26 September (the day of the GBP crisis), an increase of over 1,150%. 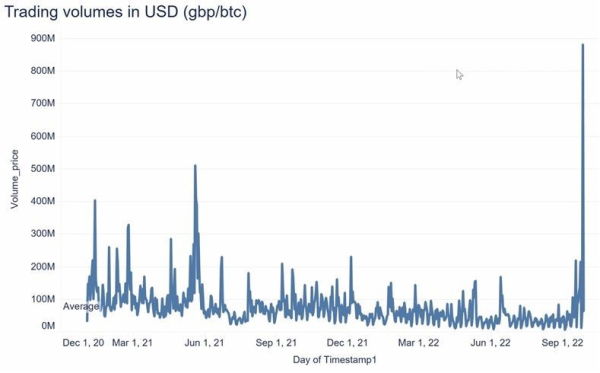 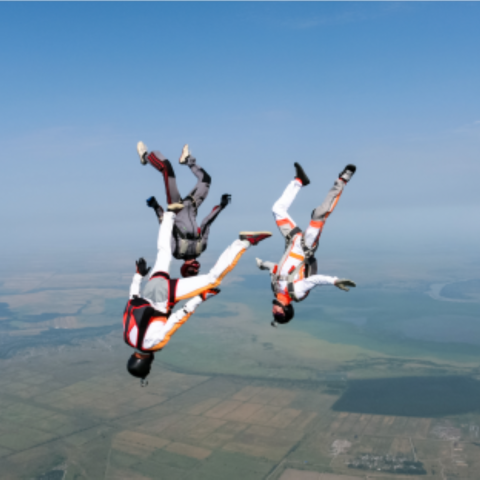