2022 seems to mark a turning point in international relations, with major implications for the global economy and ﬁnancial markets.

THE VIRTUES OF GLOBALIZATION

A few years ago, globalization was the order of the day, thanks to the formidable impetus given by two major geostrategic blocs.

On the one hand, there is the relationship between China and the United States, labelled "Chimerica" by historian Niall Ferguson. By relocating many activities to China, American companies have greatly increased productivity at the expense of nominal wages. But Chimerica still benefited the American consumer. First, China exported deflation by supplying the US with cheap goods, increasing the purchasing power of Americans. Second, the dollars earned by the Chinese through their exports were partly recycled into US Treasury bills, keeping bond yields low and encouraging borrowing in the US.

In parallel to Chimerica, another geostrategic bloc has played a crucial role in international trade: the Eurussia alliance. As Credit Suisse strategist Zoltan Poszar explains, Europe benefited for years from a cheap source of energy, namely Russian gas. In return, Russia recycled some of the euros it earned into European assets such as real estate or government bonds.

Like Chimerica, this was a "win-win" alliance. Without becoming allies, each economic partner benefited from commercial and financial exchanges and therefore had no interest in entering into conflict.

With the arrival of Donald Trump in office, the trust between China and the United States began to erode, giving way to a trade war. The Biden administration has not reversed the trend, and the pandemic has further complicated the trade relationship between America and Asia.

Russia's invasion of Ukraine in February was the endgame for the Eurussia alliance. The two big geostrategic blocs that have been in place for many years are now in an advanced state of decay.

The sanctions taken by the West against the country led by Vladimir Putin were supposed to plunge Russia into great financial difficulties. However, this ignored that sanctions were applied only by a small number of states. As the map below shows, the countries that voted for the sanctions (countries in orange) represent only 18% of the world's population, while two-thirds of the planet (countries in grey) did not vote in favour of the sanctions. 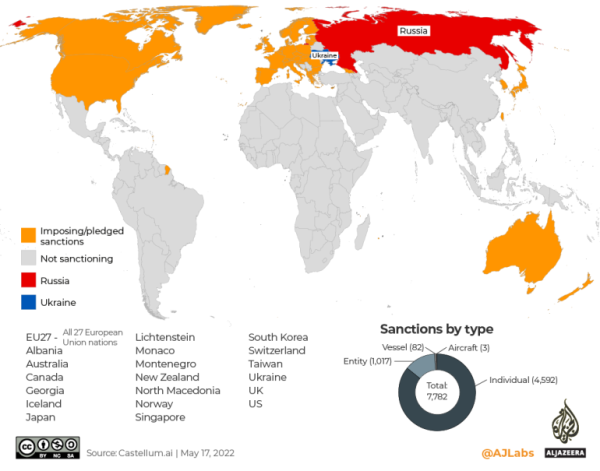 But above all, the two great Asian powers - China and India - immediately saw the window of opportunity opened by the Russian crisis: accessing its natural resources - from energy to agricultural commodities and metals - in abundance and at an advantageous price. China has avoided being too vocal about its ties with Russia, perhaps to avoid offending its two major export customers, the US and Europe (during the SCO, Russian President Vladimir Putin himself said he understood that Xi Jinping had questions and concerns about the situation in Ukraine but praised China's leader for what he said was a "balanced" position on the conflict).

India, on the other hand, has made no secret of its intention to strengthen its strategic ties with Russia. India's oil minister, Hardeep Singh Puri, has said he wants to buy as much oil from Russia as possible, stressing that he has a moral duty to his citizens. The nation’s Prime Minister, Narendra Modi, has a clear message to the West: "We are keen to strengthen ties with Moscow.”

Warm handshakes between the Russian, Indian and Chinese leaders illustrate what may be the new geopolitical face of the world; an alliance between the major Asian countries, through which China and India secure access to raw materials thanks to imports from Russia. Such relations allow President Putin to compensate for the end of trade with the West. For Russia, it is not only a question of replacing the destination of its raw material exports but also of being able to import goods and services that are no longer accessible because of the sanctions, such as semiconductors. 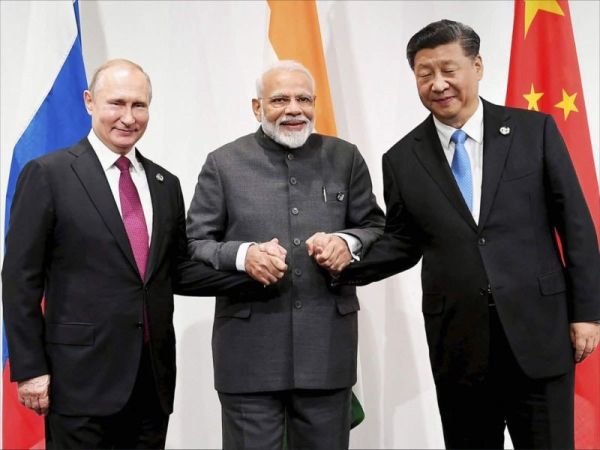 For these three giants, it is a question of accessing and controlling the raw materials and  technology necessary for their survival and development, as well as control or access to strategic shipping routes such as the straits of Taiwan, Hormuz, or the Bosporus.

As mentioned by Mr Pozsar in his study "War and Interest rates," wars are both about control and alliances. In recent months, many countries under Western sanctions have strengthened their ties.

For example, Russia and China are conducting naval exercises with Iran around the Strait of Hormuz. Iran recently hosted talks between Russia and Turkey on grain shipments through the Bosporus. Despite US pressure, India has decided to participate in Russian military exercise “Vostok-2022.”

For Mr Pozsar, we have not only entered a world where "the enemy of my enemy is my friend," but in which the "friends of my enemy" are attacked or put under pressure. This includes, of course, China's pressure on Taiwan, but also its pressure on South Korea to end all forms of military cooperation with the US. Mr Pozsar even suggests replacing the BRICs (Brazil, Russia, India, China) with TRICKs (Turkey, Russia, Iran, China and North Korea) as a sort of alliance of US-sanctioned economies that is becoming increasingly close both economically and militarily.

There is of course a parallel between these new alliances and the rapprochement between China and Saudi Arabia (see our recent FOCUS note "The end of the petrodollar?"). The use of currencies other than the dollar in trade is another tangible sign of a new world order.

A COUNTER ATTACK BY THE WEST?

The countries to the east of the globe could enter a new era of growth outperformance. The West must therefore react on several levels. The first priority is access to raw materials, whether through new trading partners or through investments in refining, exploration and production, for example. On 14 September, European Commission President Ursula von der Leyen said that she would soon present a “Critical Raw Material Act.” 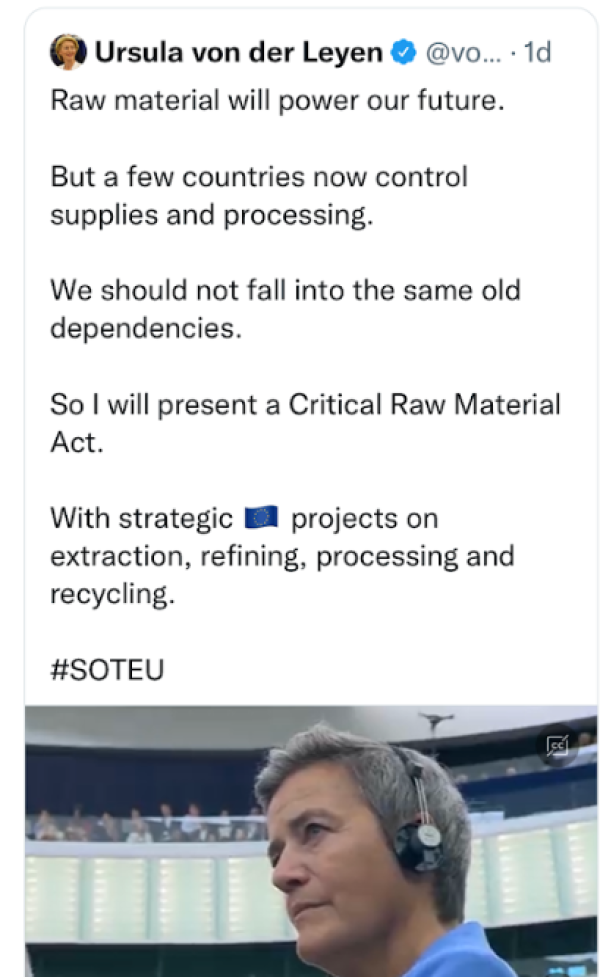 The second priority is to repatriate or "reshore" some of the production capacities that were previously relocated to countries where labour is cheap (see our FOCUS note "On the way to slowbalization"). This is now a matter of national security. Another priority is to strengthen the electricity grid through a more pragmatic energy transition, in particular by further developing nuclear power. The last priority is rearmament. "Our army must become the pillar of conventional defence in Europe," German Chancellor Olaf Scholz said on 16 September.

These lines of development require massive purchases of raw materials, which constitutes a shock to demand, even though supply is limited and highly coveted by the alliances in the East.

It should also be noted that these various projects constitute gigantic investments, which will require major loans, even though the West is already over-indebted. For the great Eastern powers of China, Russia and India, there is less and less appetite to finance the West's debt for geostrategic reasons. Borrowing costs could therefore increase.

This new world order may have important repercussions for the global economy and financial markets.

As mentioned at the beginning of this article, the low-inflation world (also called "the great moderation") had two geostrategic pillars: Chimerica and Eurussia. The weakening, or even the end of these alliances, means that the days of cheap labour, goods and gas imports are over.

Many commodities are experiencing structural shortages while demand is expected to continue to grow. The asset class may therefore have entered a super-cycle with bullish implications for inflation.

Re-shoring puts upward pressure on wages - which is also inflationary.

The US dollar has been the world's reserve currency since the 1970s. However, the rift between the West and the great powers of the East (Asia, Russia) may challenge this supremacy. The rise of China as a major world power, the exclusion of Russia from the SWIFT banking system and the implicit disagreement between the US and Saudi Arabia may accelerate the trend towards de-dollarization. Last week, world leaders of the Shanghai Cooperation Organization (SCO) agreed to use national currencies in trade between their countries, setting the stage for a potential future reserve currency to rival the US dollar.

Inflation rates that remain above central bank targets for an extended period, a continued rise in debt and a reduced appetite for G7 debt on the part of Russia, China and Saudi Arabia point to higher interest rates and bond yields.

In this new paradigm, the best performance may come from regions, asset classes and sectors that are different from those of the past ten years.

For example, commodity-rich countries may be the big winners over the next few years - as could the basic resources and energy sectors.

After years of underperformance relative to equities (see chart below), the commodity asset class could experience a period of prolonged outperformance. 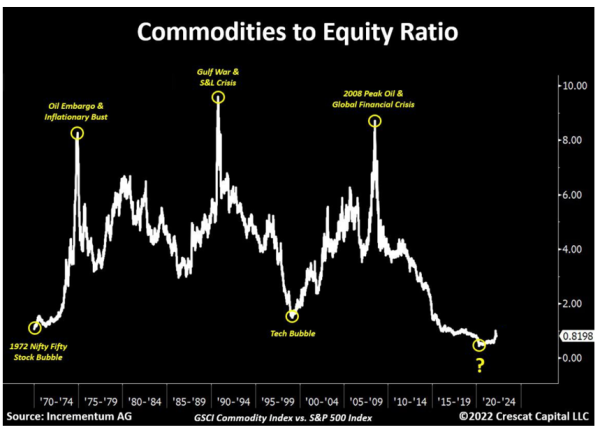 The Defense & Aerospace industry, agriculture-related businesses, those that help to strengthen the power grid and uranium miners may also benefit from this new era. Finally, "re-shoring" will create new opportunities for local small and medium-sized enterprises, as well as for the technology and robotics sector, which is necessary for productivity gains.

These themes are investable through both listed securities and private markets.

Who would lose from this new paradigm?  G7 government bonds are likely to face some tough years. Europe could be the big loser in the East-West divide. 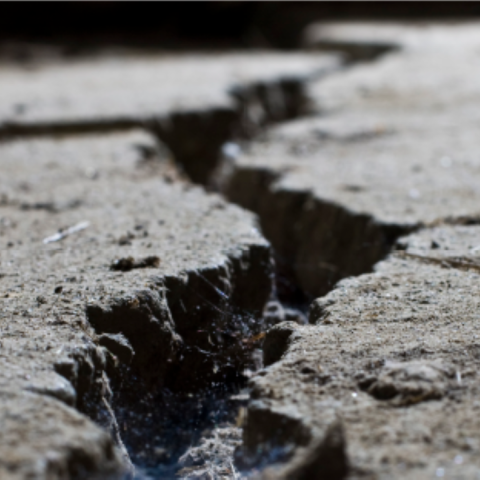