The end of the petrodollar?

The “Oil for dollars” deal between OPEC and the US has been in place since the 1970s. However, multiple geopolitical and economic factors could challenge its supremacy.

A month later, the Saudis went in the opposite direction, saying they were ready to cut production to correct the recent decline in oil prices "driven by low futures market liquidity and macroeconomic concerns." Yesterday, OPEC and non-OPEC partners, an influential energy alliance known as OPEC+, surprised the markets with a slight production cut from October onwards.

For many observers, this major disagreement between the US and OPEC should be seen as the end of the petrodollar system, a paradigm shift with major implications for the financial system and world order.

WHAT IS THE PETRODOLLAR SYSTEM?

Petrodollars are not a currency. They are simply U.S. dollars exchanged for crude oil exports. The term gained economic and political prominence in the mid-1970s amidst growing interdependence between the United States and crude oil exporters.

In August 1971, U.S. President Nixon announced the end of the "convertibility of the U.S. dollar to gold. The rest of the world's dependence on the U.S. dollar began to decline. The United States then sought to increase the demand for dollars by other means.

In 1979, the U.S.-Saudi Joint Commission on Economic Cooperation was born. Under this "Oil for Dollars" agreement, Saudi Arabia must comply with the following clauses:

1) Sell its oil to the rest of the world in a single currency, the US dollar;

In exchange, the United States provides a security guarantee to Saudi Arabia.

The oil-for-dollars deal was later extended to other OPEC countries.

THE ADVANTAGES OF PETRODOLLAR RECYCLING

For the United States 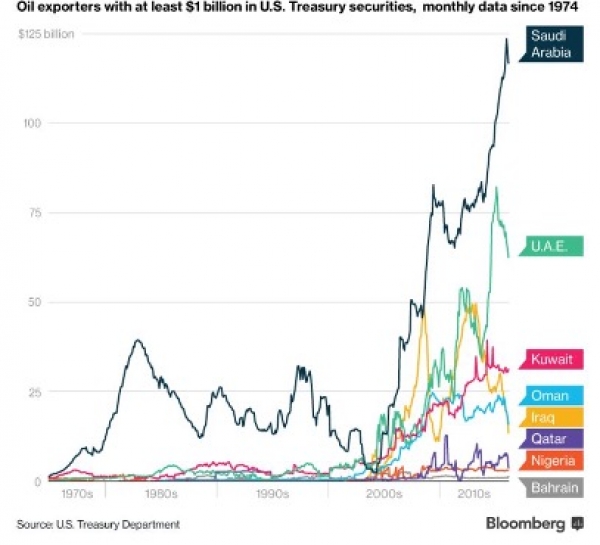 WHY IS THE PETRODOLLAR SUPREMACY WANING?

As mentioned above, the US dollar has been the world's reserve currency since the 1970s. However, multiple geopolitical and economic factors could challenge this supremacy.

The de-dollarization trend is not a new phenomenon. In the 1990s, in response to U.S sanctions, Venezuela tried to break out of the status quo by switching from U.S dollars to Chinese yuan for oil payments. Rapid globalization also poses a threat to the greenback, as many countries with bilateral trade relations would like to be able to use their own currencies for trade. However, the great financial crisis of 2008 put an end to any desire against the greenback, as investors sought the security offered by the current reserve currency.

But today, the rise of China as a major world power, the exclusion of Russia from the SWIFT system and the implicit disagreement between the US and Saudi Arabia may well accelerate the trend towards de-dollarization.

Over the decades, the Saudi kingdom has been one of the United States' most important allies in the Middle East - largely through the "oil for dollars" agreement. Economically, Saudi Arabia has been the largest supplier of crude oil to the United States. Geopolitically, the Kingdom has been a U.S. proxy in the Middle East to counter its great rival, Iran. But over the years, this relationship began to deteriorate.

The United States has gradually reduced its dependence on oil imports by building up its own strategic reserves. In the 1990s, the United States imported about 2 million barrels per day of Saudi crude. This figure fell to only 500,000 barrels per day by 2021. Politically, Saudi Arabia is clearly not happy with Biden's Middle East policy. Biden's decision to unilaterally withdraw his support for Saudi Arabia in the Yemen war has alienated the Kingdom from the U.S. administration. Biden's stated intention to salvage the nuclear deal with Iran has probably sealed any hope for improved relations.

Since Russia launched its assault on Ukraine in February, Saudi Arabia has refused to pay attention to Biden's calls to extend crude supply quotas to limit rising oil prices.

But this indifference to Western calls has an underlying reason that goes beyond the dispute with the United States: it is the growing cooperation between China and Saudi Arabia, which is not limited to the energy sector. Under the umbrella of its Belt and Road Initiative, China has expanded its potential presence in the Kingdom through bilateral cooperation in infrastructure, trade and investment.

According to the American Enterprise Institute, cumulative Chinese investment in the Saudi economy reached $43 billion in 2021. China imported an estimated 542 million tons of crude oil in 2020, accounting for 25% of the Kingdom's global oil exports. According to some sources, the Kingdom's sovereign wealth fund (PIF) may soon start investing in Chinese companies. Saudi Aramco is reportedly close to entering into a partnership with a Chinese petrochemical consortium. All these factors seem to indicate that Saudi Arabia is increasingly turning to China. The de-dollarization of trade and investment would obviously facilitate their bilateral relations.

It is worth noting that the United Arab Emirates are well aligned with the Saudis. Their cooperation with China is also growing strongly. And they are obviously ready to cut their production whenever OPEC+ decides to do so. It is also interesting to note that Egypt, another ally of Saudi Arabia, has just launched its first yuan-denominated bond.

Like the Gulf countries, economies such as Russia and Iran have also moved closer to Asia. Russia, for example, is turning to the CIPS system - a transaction system that clears international settlements and trades in Renminbi - to be able to export its oil to Asia under Western sanctions. China and India now account for 40% of Russian oil exports. In India, Russian crude accounts for about 17% of imports - up from less than 1% before the invasion. Even Iran has begun exporting crude to China under US sanctions without using the US dollar for payments.

Some economists believe that this trend is not sustainable, drawing parallels with Venezuela's failed attempt at de-dollarization in the 1990s. But the context is very different this time. First, Asia is much less dollarized than Latin America. Also, Asian economies are much larger in size and impact on monetary policy. Even a step towards "semi-dollarization" could diminish the influence of the United States and undermine the awesome mechanics of the petrodollar. With consequences beyond the energy exporting countries. If the dollar loses its importance in trade, many central bank governors may be prompted to rethink the logic of accumulating reserves, as well as the wisdom of allocating part of their central bank's balance sheet to U.S. Treasury bonds.

The US government is obviously aware of these risks and is concerned about the defiance of the OPEC+ alliance. A US Senate committee has been working on a bill called "No Oil Producing or Exporting Cartels" (NOPEC) to amend US antitrust law. Such a bill would give the Attorney General the power to expose OPEC+ countries to prosecution for possible collusion. The proposal has so far failed. Saudi Arabia has already warned in 2019 that such a bill, if passed, would prompt it to trade its oil in different currencies. Sanctions on Russia and China's growing influence in Eurasia are setting the stage for a very gradual move away from the petrodollar, NOPEC or not.

THE RISE OF THE PETRO-YUAN

The history of currencies since 1450 shows that different currencies have alternately played their role as world reserves for very long periods. Will the dollar soon give way to the yuan? 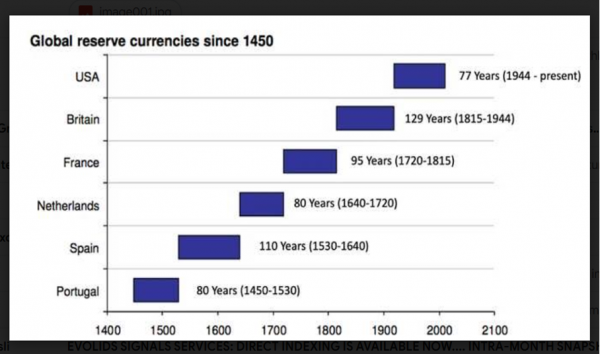 Recent developments suggest that the petro-yuan may one day replace the petrodollar. However, the petro-yuan has some disadvantages compared to its counterpart. While China's financial markets have grown exponentially over the past few decades, they remain relatively illiquid compared to the US capital markets. In addition, the huge Eurodollar market ($13.4 trillion) greatly facilitates trading in European markets. As for yuan transactions, they would be limited to China and subject to manipulation by the People's Bank of China.

ANBOUND founder Chan Kung believes that the dollar's status as the world's reserve currency may even strengthen in the coming years. For him, the current period of economic and geopolitical uncertainty reinforces the dollar's status as a safe haven. This is what the markets are currently witnessing, as the Bloomberg Dollar Index (DXY) is at a 20-year high. 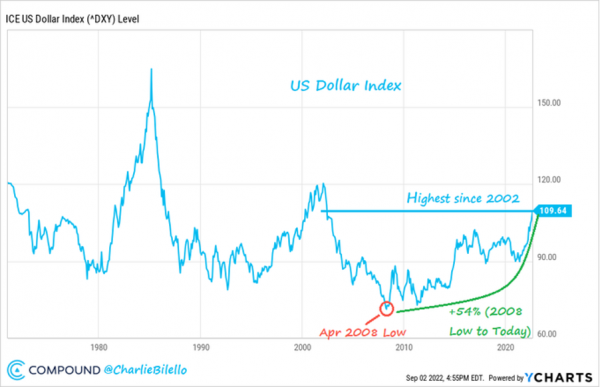 Kenneth Rogoff is more ambivalent. He believes the latest developments will certainly accelerate the end of the dollar's domination. But for the Harvard professor, the end of its hegemony will only take place in about 20 years.

The end of the petrodollar would imply a very different dynamic than the one we know today. Commodity exporting nations would be able to free themselves from the dollar and fix their currencies against a basket of commodities. Importing countries would have to buy these currencies to pay for their energy or agricultural imports. The currencies of commodity-exporting regions would appreciate accordingly, especially since years of underinvestment have created significant supply deficits in some commodities.

We may be at the dawn of a new era, a multipolar world where bilateral trade agreements will replace the old world order centered around the petrodollar. A paradigm shift that could penalize first and foremost those regions that are most dependent on raw material imports, namely Europe and Japan. Indeed, these two regions will probably remain cut off from Russia and will not benefit from any currency recycling to finance their respective debts and deficits. On the other hand, bilateral agreements such as Russia-India or China-Saudi Arabia could strengthen the economic and geopolitical power of these countries located in the East.

For its part, America could be less affected than other developed countries. Firstly, because its economy is essentially domestic, but also because it can become self-sufficient in many raw materials. The decline of the petrodollar would still push up inflation and interest rates. 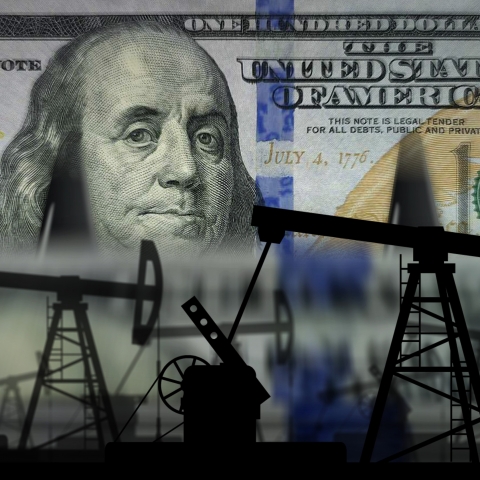