Rising oil prices, booming tourism, Expo 2020’s success, structural reforms: lately, everything seems to be going in the right direction for the United Arab Emirates. A favorable situation that is also benefiting the local equity markets.

The years 2010 to 2020 can be seen as a lost decade for the UAE: falling oil prices and a real estate crisis hampered growth, which was sluggish for years before collapsing in 2020 on the back of the COVID 19 crisis. This rich country of less than 10 million citizens was hit hard by the pandemic. The impressive fleets of Emirates and Etihad airlines were grounded. Giant luxury hotels and malls closed slammed their doors shut. And in April 2020, oil prices collapsed, with dramatic prospects for the budgetary expenditure of the Gulf States, including Abu Dhabi, the world's 6th largest oil producer.

A "double whammy" that at the time seemed like the final nail in the coffin for a real estate market that had been struggling for several years already, due to an oversupply of housing, business and hospitality projects.

Life returned to normal in 2021, thanks in particular to the very good management of the Covid crisis: strict sanitary provisions (which were respected to the letter), large-scale PCR testing in the country but also at the borders (one of the first countries to do so), regular tracing of personnel in many companies, etc. The UAE has also implemented a very successful mass vaccination campaign. These measures allowed the UAE to open its doors to tourists as early as October 2020, at a time when many countries were closing their borders and struggling to control the spread of the virus.

As a result, Dubai has become a go-to destination for many tourists. Expo 2020 - which opened in 2021 - was a huge success with nearly 24 million visitors (Milan attracted 21.5 million in a Covid-free world).

Dubai Airport - a true aviation hub and the world's largest by traffic - is projected to see the number of passengers passing through this year nearly double from 2021, with 55 million passengers expected. The record level reached in 2019 should be surpassed in 2024.

At the business level, Jebel Ali Commercial Port is benefiting from the strong recovery in global trade, with logistics company DP World's turnover growing by 26% in 2021.

The Dubai International Financial Centre - the DIFC - is recording its best results since its inception 16 years ago with a 36% increase in listings in 2021. Nearly 1,000 new companies were registered last year, setting a new record.

The UAE is also combining technological innovation and legal initiatives to position itself as the leading regional hub for crypto-finance.

As for energy-related revenues, they are benefiting from the upturn in oil prices. Government spending has a strong impact on the UAE economy and the increase in revenue therefore allows for a certain fiscal generosity that directly benefits Abu Dhabi and indirectly Dubai, which is highly visited by its Gulf neighbours (Saudi Arabia, Kuwait, Iraq, Oman, Bahrain, etc.).

To the surprise of many observers, the real estate market is booming. In 2021, the volume of transactions has reached a record level of 300 billion Dirhams, i.e. an increase of 72% compared to 2020.

And the real estate turnaround is not just a cyclical recovery story. Indeed, investors are regaining confidence, welcoming geopolitical advances and reforms that should lead to even more individuals and businesses choosing Dubai and other Emirates as their home.

On the geopolitical front, the normalisation of relations with Israel, through the signing of the Abraham Accords in September 2020, is a remarkable development. These agreements include diplomatic and trade relations. The UAE relationship with Qatar is also normalizing (the UAE and Qatar had a diplomatic crisis in 2017). The latest "boost" to the real estate recovery has been the “en masse” arrival of Russians as the UAE is among the few countries ready to welcome them since the invasion of Ukraine by Russia and the sanctions, which have since been applied to Russian citizens.

In addition to the influx of these wealthy expatriates, major reforms introduced by the government have boosted investor and end-user confidence in the property market. These include societal advances such as the possibility for unmarried couples to cohabitate, the relaxation of alcohol laws, new types of visas with a 10-year "Golden Visa", as well as reforms in the economic sector, which include aligning with the "universal weekend" (from Saturday to Sunday), and the possibility for foreigners to own 100% of an Emirati company among others.

The economic activity of the Emirates is benefiting from all these favourable winds since the real GDP should progress by 4.6% in 2022 against 3.4% in 2021.

Local markets have embraced the upturn and are looking forward to even better days. In 2021, the Abu Dhabi index rose by 76% while the Dubai stock market is up 32%. In 2022, UAE equities continue their upward march with double-digit gains, making them one of the best performing markets in the world. 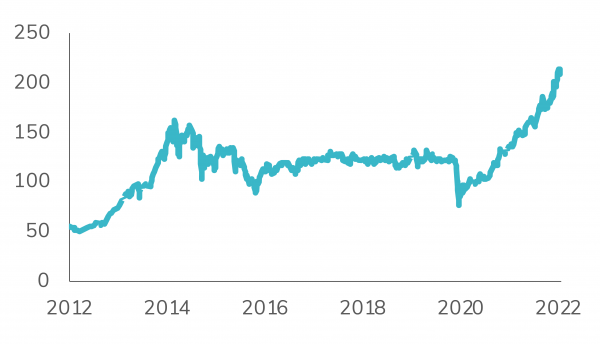 Rising property prices are benefiting development companies and banks - two sectors that are heavily represented in the S&P UAE index (around 60%).

The sector composition of the index and the region's sensitivity to hydrocarbon prices continue to attract value investors. After the sharp rise of the last 12 months, the S&P UAE index is trading at around 16 times expected earnings. The average dividend yield is close to 4%.

For the first time in many years, there is a flurry of new IPOs. In mid-April, the IPO of Dewa, a utility company, was a great success. Around ten state-controlled companies are set to go public in 2022. These include SALIK, Tecom, Empower, Dubai Duty Free, Jumeirah Group and even potentially Emirates Airlines. Companies owned by local families are also being encouraged to go public and the Al Habtoor/ Al Futtaim Group may consider listing some of its assets. Combined with the increase in foreign ownership limits, these IPOs are expected to increase the UAE's weight in emerging market indices and thereby attract international investors.

Indeed, the UAE equity market is a niche market within emerging markets. Trading volumes remain low - even by emerging market standards - and local stock exchanges account for only 1.2% of the MSCI Emerging Markets Index.

However, after years of underperformance, the UAE equity markets look set to benefit from the favourable winds aforementioned. In a business world that is becoming more remote, the UAE could become a destination of choice for many entrepreneurs, fund managers, venture capitalists, etc. to relocate. These macro-economic developments should benefit companies (and thus stocks) active in real estate, finance, tourism and other services.

How to invest in local equity markets

There are few options for investing in UAE shares. Some brokers allow investment in the largest caps but clients must have a NIN (National Identification Number) - a time- consuming process for financial intermediaries.

There are also a few funds or ETFs, but not all are accessible to international investors. Local asset managers such as Emirates NBD, ADCB, FAB and Al Mal Capital market actively manage funds invested in the region. On the passive side, the iShares MSCI UAE ETF (UAE US) trades on the Nasdaq exchange and has a market capitalisation of $40 million.

NB : These are not investment recommendations

While UAE equities are currently benefiting from a positive macroeconomic and geopolitical context, there are also some downside risks. First, Middle East equities continue to be driven – at least to a certain extent – by oil prices. A sharp correction from black gold would have some negative impact on the UAE’s fiscal position and thus on local equity markets. The UAE Dirham is pegged to the US dollar, which means that the UAE central bank needs to follow in the steps of the Fed when it comes to monetary policy. As such, the Fed tightening implies a similar outcome in the UAE.

This could weigh on consumption but also the real estate market through higher mortgage rates. Furthermore, the region remains exposed to geopolitical risks. Valuations are less attractive than a year ago. Last but not least, the local equity market liquidity is thin and should thus be traded accordingly.