Despite the pro-Kurdish party (HDP) passing the ten percent threshold required to enter the Turkish parliament, which could have prevented a majority for Erdogan, the People’s Alliance won a clear majority with 54% of the vote (43% for the AKP and 11% for the MHP). The opposition coalition, the Nation Alliance, received 34% of the vote and the HDP gained 12% support. In addition, Erdogan won an absolute majority in the presidential election with 53% of votes, avoiding a second round. 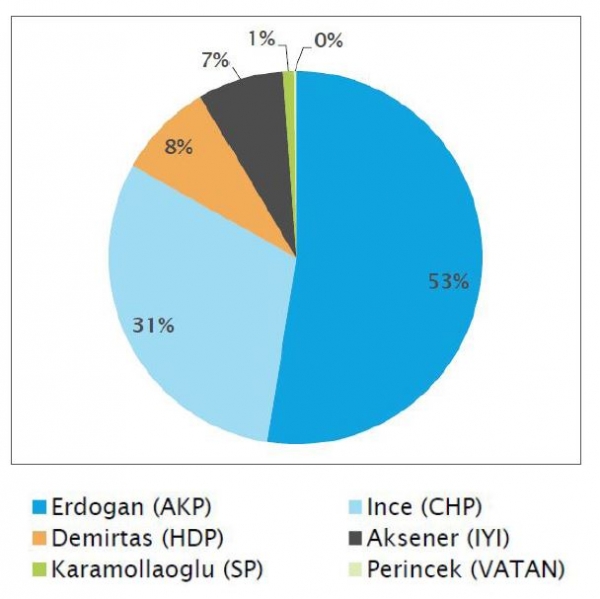 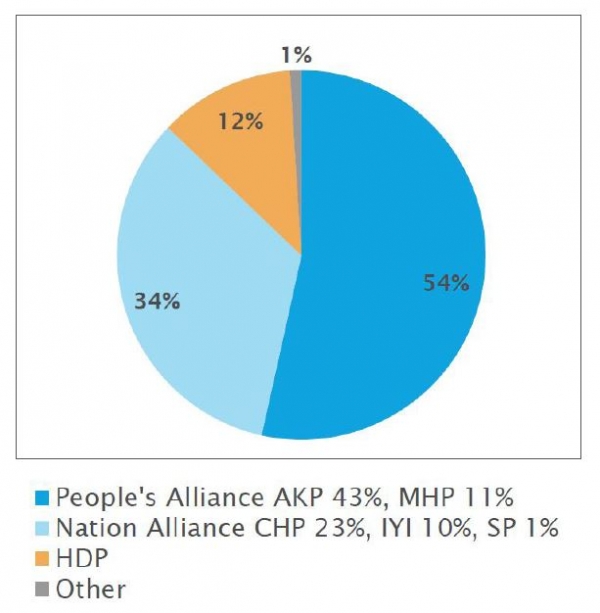 Due to its reliance on external financing, the country was particularly exposed to investor sentiment prior to the elections. The clear outcome – instead of a hung parliament – offers the advantage of avoiding prolonged periods of uncertainty and political instability, which should be welcomed by investors. In June 2015, when Erdogan’s party failed to win a parliamentary majority, market sentiment was negative, before turning positive in November when the AKP won the snap elections. In the same vein, this year the lira strengthened just after Erdogan called early elections, as the period of uncertainty was reduced from eighteen months to two months, before reversing afterward.

Erdogan winning in the first round and having a majority in parliament will help stabilise the currency in the short term. The prospect of a hung parliament would have certainly added more downward pressure to the lira, especially with the political system about to change. The political deadlock would have forced Erdogan to call further elections. However, the new government must implement reforms to reassure investors. The main issues to be dealt with are heightened inflation, a large current account deficit and the central bank’s lack of credibility. It seems unlikely that major economic reforms will be announced before the municipal elections in March next year. Besides domestic issues, the lira depreciation underlines also the adverse external environment that Turkey is facing, with US monetary policy tightening, rising energy prices and the spectre of trade wars. To prevent further lira weakness, Erdogan has to demonstrate his willingness to strengthen the central bank’s independency. Despite making numerous comments against tighter monetary policy, the recent interest rate hikes could suggest that Erdogan has adopted a more pragmatic approach.

To see a substantial rally in Turkish assets it is necessary to have political stability, a commitment to cool down the economy, tight monetary policy and a favourable environment for emerging markets. For the moment only the first requirement has been met. Hence, Turkish assets should remain range-bound until the municipal elections in March next year.

The story so far

Since 2003, Erdogan’s political mandates as prime minister and president have been marked by significant economic progress. However, over the past few years economic conditions have started to deteriorate. The government has always favoured higher growth driven by private debt and construction over inflation, leading to imbalances such as a large current account deficit that requires foreign capital inflows. Global conditions have changed in 2018 and penalised Turkey, which is sensitive to EM risk-off sentiment, higher US rates, a stronger US dollar and rising energy prices. The Turkish lira has been under pressure - after losing 7% against the US dollar in 2017, the fall accelerated this year to -19% YTD as of June 22nd. This decline partly underlines the central bank’s reluctance to raise interest rates, on the back of political constraints.

Trouble for the Turkish economy

After seeing weak growth in 2016 (3.3%), Turkish economic activity accelerated in 2017 to 7.3%, on the back of government spending and credit guarantees. The economy continued to expand at a strong pace in the first quarter, reaching 7.4%. Industrial production remained strong, but increased at a slower pace in April. This slowdown should persist over the coming months, as suggested by the latest Manufacturing PMI data. Growth is expected to slow towards 4% this year, penalised by higher interest rates, weaker currency and stronger inflation. The stimulus package recently announced to boost employment and investment would not prevent this drag.

Inflation has been well above the 5% central bank target. Headline CPI rose to 12.1% YoY in May, one of the highest recordings since 2003. The core CPI (excluding energy and food) reached a record high of 12.8%, reflecting strong domestic demand. The recent fall in the lira and increase in oil prices will add further upward pressure on inflation going forward. Inflation is expected to remain in double digits this year at around 11%. To see lower inflation, the lira has to stabilise and the central bank should maintain a tight monetary policy stance, possibly with further rate hikes.

The central bank has responded to the currency weakness by delaying any decisions, postponing the inevitable rate hikes. The 425bps hike in rates over the course of two weeks halted the currency depreciation and quietened doubts about the central bank’s capacity to raise rates, despite the opposition of President Erdogan.

The Monetary Policy Committee (MPC) had scheduled an extraordinary meeting on May 23rd to hike its key interest rate by 300bps to 16.5%. On May 28th, the MPC announced the simplification of its monetary policy by restoring the one-week repo rate. These interventions came a few days after Erdogan’s discussed his desire to have greater control over monetary policy after the election, which triggered the fall of the lira. Finally, the policy makers raised the key interest rate again by 125bps to 17.75% on June 7th and indicated it would deliver further tightening if needed. 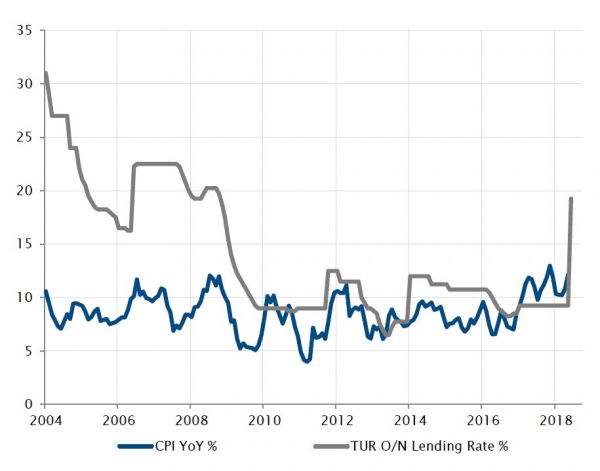 After winning his first general election in December 2002, Erdogan was appointed as prime minister until 2014, after which he was elected president. In July 2016, following a failed coup, emergency rule was established in the country. In 2017, a narrowly-approved referendum amended the constitution and shifted the parliamentary system to a presidential system. Under the new regime, the president will enjoy more executive powers, while parliament will be weakened. The constitutional amendment could allow Erdogan to remain president until 2028 (in two consecutive five-year terms) or longer if he calls snap elections during the second term. The change was due to take effect after the following presidential and parliamentary vote scheduled for November 2019.
However, Erdogan called early presidential and parliamentary elections for 24th June, as he was benefiting from strong popularity and did not want to risk a further deterioration of the economy. Erdogan’s popularity has been built partly on his capacity to improve living standards.

Following the change in law that allows parties to band together for parliamentary elections, the AKP made an alliance with the nationalist party MHP (the People’s Alliance). AKP couldn’t govern alone - in the past it has needed the support from other parties. Opposition parties on the center-left and right have united, led by Mr Ince from the CHP, to form the Nation Alliance. Despite some polls suggested the Nation Alliance together with the Kurds of the HDP could have formed a majority at the parliament, the Turkish voters decided to support Erdogan’s presidency.