On the way to “slowbalisation”?

“Slowbalisation”, which began even before the start of Covid-19, is a counter-trend to globalization. The pandemic could further accentuate this phenomenon.

Over the last few decades, advances in communication and transportation systems have led to the phenomenon of globalization, with a progressive increase in world trade as a percentage of world GDP.

The globalization of trade has led to a more efficient use of labor and resources. However, this evolution is not linear over time. As mentioned in a research by Lyn Alden, the world has also experienced occasional periods of de-globalization. For example, the period between the two world wars was characterized by tariff and trade wars. While the post-war period saw a strong increase in world trade, globalization came to a clear stop in the 1980s. Fed Chairman Volker raised interest rates sharply to protect the dollar during the high inflation of the 1970s. This led to financial crises in Latin America and a slowdown in trade.

But it was at the end of the last century and the beginning of the 2000s that globalization experienced its golden age. The Chinese economy began to become more open to the world in the 1980s under Deng Xiaoping. In 1991, the Soviet Union dissolved, leaving Eastern Europe and Central Asia open to the rest of the world. From then on, along with U.S. trade policies that attempted to exploit these new markets, the rise of information technology further facilitated trade. China’s entry into the WTO in 2001 gave yet another boost to the globalization process, before the financial crisis of 2008 brought the globalization movement to a stop. Since then, the share of world trade in GDP has been declining. This has led to talk of “slowbalisation”, a neologism developed by the Dutch writer Adjiedj Bakas. It defines a trend that runs counter to globalization. It is growing as globalization slows down, affected by, among other things, rising customs costs, climate and environmental discussions.

Before the start of Covid, the risks to supply chains were already on the rise. The United States and China had begun their trade war. In the U.S., the trade protectionism that the Trump administration had put forward was not supposed to go away. During his election campaign, Joe Biden emphasized the slogan “Made in America”, and there was already strong political pressure to address the trade deficit and the concentration of wealth, both of which were much more apparent in the United States than in other developed countries, even though protectionist policies were also in place elsewhere, (“Brexit” in the United Kingdom, state capitalism in China, etc.).

The effects of globalization on the American economy

Globalization has had both positive and negative consequences for different regions of the world. Many emerging countries have benefited from the trade boom and the offshoring of activities by most developed countries. What about the U.S. economy?

The gap between productivity and wage growth has widened

From the 1970s to now, U.S. labor productivity and wages have not followed the same trajectory. This dichotomy has consequences for the inflation rate, since the U.S. economy has experienced several cycles of disinflation and even deflation. It has also benefited corporate margins and profits, as the share of profits accruing to capital has risen to historically high levels at the expense of the share accruing to labor. 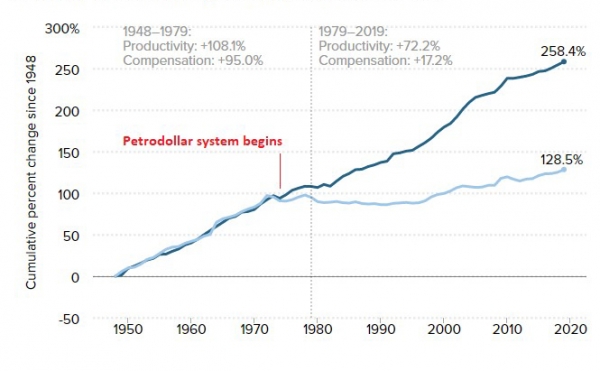 The widening of deficits

Since the early 1990s, the United States has been running structural trade deficits with the rest of the world. Undeniably this deficit in the U.S. goods and services balance also reflects a more dynamic U.S. economy.
But a closer look at the deficit highlights the vulnerabilities of the system. The United States is a net exporter of services but a very large importer of goods. 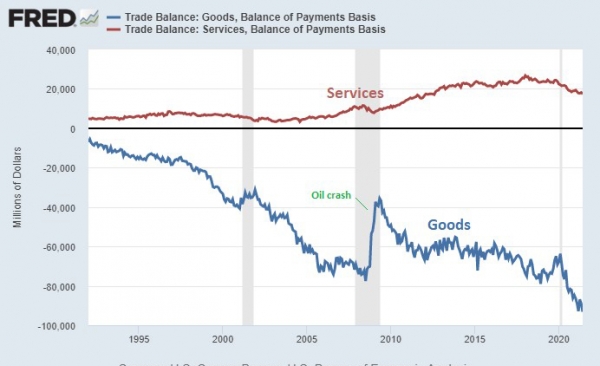 The covid-19 crisis has further accelerated this trend. With lockdowns in place and fiscal stimulus measures, the United States and other developed countries experienced an explosive difference between consumption of goods and services. Consumers stayed at home and therefore reduced their 4consumption of services (travel, restaurant, entertainment, etc.) while having consumer goods delivered to their residences.

The accelerating phase of globalization that began in the 1990s has led to deindustrialization and the outsourcing of supply chains of physical goods from developed countries to the rest of the world. This trend is even more pronounced in the United States than in the other G7 countries, and therefore makes Uncle Sam particularly vulnerable to any disruption of supply chains.

World trade reached 61% of world GDP in 2008. Perhaps this is a peak, because globalization has limits. An interconnected world becomes more efficient and productive but also less resilient. For example, the shutdown of a major port in China due to the discovery of a positive case of COVID-19 can have an impact on dozens of other countries. The fact that the production of high-tech devices consisting of thousands of parts could be delayed because a few parts are not available from a foreign supplier shows the limits of globalization.

Take the case of the computer memory card industry. Taiwan and South Korea account for much of the world’s high-end semiconductor production. Nvidia, for example, is a factory-less Semiconductor Company that relies on Taiwan Semiconductor Manufacturing to produce its chips. And just three companies, Samsung, Micron and Hynix, are responsible for about 95 percent of computer memory manufacturing.

Phones and computers, essential to our work, probably contain parts from Taiwan, Japan, Germany, Switzerland, the United States and the United Kingdom, with Chinese or Taiwanese assembly. They also probably depend on hydrocarbons from the Middle East, the United States or Canada for plastic components.

The governments of developed countries - and first and foremost the American administration - have become aware of their vulnerability to the risks associated with globalization and the relocation of supply chains. Consequently, the post-pandemic period could be characterized by a period of accelerated “slowbalisation” (i.e. a slowdown in globalization), or even a real “de-globalization”.

This could first of all lead to stronger integration at the level of “world regions” (continents or sub-continents). This is for instance what the RCEP (Regional Comprehensive Economic Partnership) trade agreement between China, Japan, Australia, South Korea and other countries in the Asia-Pacific region suggests. In a multipolar world, the various regional powers may be attracted to building a strong primary market at the regional level, which they can rely on even in times of international crisis. These initial markets should benefit from a certain degree of protection against international competition.

At the corporate level, after several decades of extreme globalization, it seems that we are entering a new long-term trend of relocation (“reshoring”) of part of the supply chains. This trend should improve the resilience of the production process, but could also have consequences for inflation.

Possible winners and losers of relocation

Company results and manufacturing purchasing managers’ surveys (PMI) have already identified some sectors that are benefiting from the trend of relocation of US production chains. One example is metal-based products (cans, pipes, fasteners, etc.). The relocation of these products is a boost for American steel companies. Automation and robotics-related companies should also benefit.

But this reshoring / de-globalization will also have negative effects on the economy. It’s worth remembering that globalization has advantages such as improving living standards in emerging economies (a positive point for world growth), the decrease in the price of manufactured goods (favorable to the purchasing power of households in developed countries) or the increase in margins and profits of industrial companies (possibility of producing where the costs are lowest and continuing to sell with high margins).

Of course, relocation and de-globalization policies may seem politically attractive in developed countries because they give voters hope that some jobs will be repatriated. But in terms of purchasing power and corporate profitability, “slowbalisation” will have a cost.

This marketing document has been issued by the Syz Group (hereinafter referred to as « Syz »). It is not intended for distribution to or use by individuals or legal entities that are citizens of or reside in a state, country or jurisdiction in which applicable laws and regulations prohibit its distribution, publication, issue or use. Users are solely responsible for verifying that they are legally authorised to consult the information herein. This material is intended for informational purposes only and should not be construed as an offer or solicitation for the purchase or sale of any financial instrument, or as a contractual document. The information provided herein is not intended to constitute legal, tax, or accounting advice and may not be suitable for all investors. The market valuations, terms, and calculations contained herein are estimates only and are subject to change without notice. The information provided is believed to be reliable; however the Syz Group does not guarantee its completeness or accuracy. Past performance is not an indication of future results.